Packard Fellowships in Science and Engineering Announces 2019 Class of Fellows

October 15, 2019 • In Conservation and Science, Science, Packard Fellowships for Science and Engineering

October 15, 2019 (Los Altos, CA) – Today, the David and Lucile Packard Foundation announced the 2019 class of Packard Fellows for Science and Engineering. This year’s class features 22 early-career scientists and engineers, who will each receive $875,000 over five years to pursue their research.

The Packard Fellowships in Science and Engineering are among the nation’s largest nongovernmental fellowships, designed to allow maximum flexibility in how the funding is used. Since 1988, this program has supported the blue-sky thinking of scientists and engineers with the belief that their research over time will lead to new discoveries that improve people’s lives and enhance our understanding of the universe.

Fellows have gone on to receive a range of accolades, including Nobel Prizes in Chemistry and Physics, the Fields Medal, the Alan T. Waterman Award, MacArthur Fellowships, and elections to the National Academies. The Fellows also gather at annual meetings to discuss their research, where conversations have led to unexpected collaborations across disciplines.

“This new class of Fellows is about to embark on a journey to pursue their curiosity down unknown paths in ways that could lead to big discoveries,” said Frances Arnold, Chair of the Packard Fellowships Advisory Panel, 2018 Nobel Laureate in Chemistry, and 1989 Packard Fellow. “I can’t wait to see what direction the work of these brilliant scientists and engineers will take. Their efforts will add to this beautiful web of science that connects us all to a better understanding of the world around us.”

Through the interactive online experience Pursuing the Unknown, the inspiring work, ideas, and careers of over 30 years of Fellows comes to life, including 2014 Fellow Trisha Andrew’s work developing smart clothing, 2016 Fellow Meg Crofoot’s use of GPS technology to track how primates socialize in groups, and the efforts of 2014 Fellows Vedran Lekic and Brice Ménard, who met as Packard Fellows and are collaborating to improve our understanding of earthquakes.

The Fellowships program was inspired by David Packard’s commitment to strengthen university-based science and engineering programs in the United States. He recognized that the success of the Hewlett-Packard Company, which he cofounded, was derived in large measure from research and development in university laboratories. Since 1988, the Foundation has awarded $429 million to support 617 scientists and engineers from 54 national universities. This year’s Fellowships are also supported in part by the Ross M. Brown Family Foundation.

The recipients of the 2019 Packard Fellowships in Science and Engineering are:

The Alexandrov Lab is focused on mapping and understanding the mutagenic processes that cause cancer. By developing novel computational approaches and applying them to large datasets from cancer patients, our lab aims to provide a detailed roadmap for preventing human cancer.

Rebuilding marine fisheries requires solutions that sustainably increase the productivity of ecosystems. The Allgeier Lab uses artificial reefs, modeling, and community-based conservation programs to understand how an unlikely but renewable source of fertilizer, fish excretion, can be used to stimulate fish production and improve food security in tropical coastal ecosystems.

Behroozi’s lab will generate a complete, transformative picture of how supermassive black holes (like those imaged by the Event Horizon Telescope) form in galaxies. This will resolve key questions about black holes’ radiative efficiencies and spins, as well as constrain the rates of black hole mergers and detectable gravitational waves.

In biology, function arises from structure. The Chang lab uses cutting-edge electron and optical imaging methods combining with innovative analytical tools to look into cells in unprecedented details, aiming to decipher the principle and mechanism of cellular processes through direct molecular structural investigations.

Planet formation is complex, both physically and chemically. Cleeves studies the dusty disks around young stars where planet formation happens. Using both computer models and observations, her group aims to figure out how the properties of disks lead to robust planet formation, especially with respect to potentially habitable planets.

Currently, the Earth is the only planet known to harbor life. The Dressing group is advancing the search for life on planets orbiting nearby stars by using a variety of ground-based and space-based telescopes to discover new planets, determine their characteristics, and assess their suitability for life.

A single human cell contains several billion macromolecular building blocks. We investigate the design principles that cells use to organize their contents, and how defects in the cellular organization can contribute to human disease.

Optical atomic clocks are the most precise devices ever constructed by humankind. The Kolkowitz group is researching ways to harness this precision to shed light on some of the big open questions in physics, such as the nature of dark matter, and the connections between quantum mechanics and gravity.

The relationship between tropical rainfall and global climate depends on complex interactions between the oceans, atmosphere, and land surfaces. The Konecky group integrates field, lab, and climate model experiments in order to disentangle these hydroclimatic processes on scales from molecular to global, from the geologic past to today.

The natural world is not always red in tooth and claw – species collaborate. The Li lab studies how animals and algae closely work together to efficiently convert solar power to organic nutrients. She explores the genetic and biochemical mechanisms behind this collaboration and applications to agriculture.

In the 19th century Napoleon set a prize for the best mathematical explanation of Chladni’s resonance experiments. Nodal geometry studies the zeroes of solutions of elliptic differential equations such as the visible curves that appear in these physical experiments. Logunov’s research focuses on problems in nodal geometry, harmonic analysis, partial differential equations and geometrical analysis.

An enduring mystery is how all the amazingly different types of cells within the human body emerge from a single cell. By understanding the biological principles underlying how cells become different, Loh’s laboratory seeks to artificially build various types of human cells in a Petri dish from pluripotent stem cells.

Petersen’s research involves design and coordination of large robot collectives able to achieve complex behaviors beyond the reach of single robot systems, and corresponding studies on how social insects do so in nature. The goal is to achieve robust autonomous systems for applications in construction, agriculture, exploration, and more.

Molecules can’t be seen with the naked eye. Instead, we rely on their interaction with quanta to interrogate their structures. The development of new technologies and methods makes that possible, particularly our use of electron microscopy. These tools and techniques can reveal undiscovered structures important to both chemistry and biology.

Microbes are most often found forming complex ecological communities that carry out essential functions throughout the biosphere.By tightly integrating genomic information, dynamic metabolic models, and high-throughput experimentation, the Sanchez lab seeks to quantitatively predict how microbial communities will assemble, and how they will evolve in a given environment.

Maintaining protein homeostasis is essential for cell viability, fate, and function. Shao’s lab aims to understand the molecular mechanisms that detect and handle problems at different steps of protein biosynthesis by biochemically rebuilding cellular pathways for mechanistic and structural dissection.

We seek to understand and program collective behavior in biological systems across different scales of organization ranging from the molecular to cellular scale. We construct and apply mathematical models to control processes ranging from the self-organization of active matter to the development of neural circuits in the brain.

The Yang group uses a combination of satellite observations, computer models and theory to study the Earth’s weather and climate. We focus on understanding the physics of rainstorms to address what sets their temporal and spatial scales, and how the collective effect of individual rainstorms shapes the Earth’s climate.

Understanding how to program life-like dynamic characteristics into what otherwise would be a static system is an important aspect of designing functional materials. Zarzar’s lab investigates how chemical and mechanical pathways couple in soft materials, such as droplets and gels, to yield such adaptive behaviors and also explores laser writing to synthesize and integrate diverse microscale materials.

For more detailed information on each of the Fellows, please visit the Fellowship Directory.

About the Packard Fellowships for Science and Engineering Selection Process

Each year, the Foundation invites 50 universities to nominate two faculty members for consideration. The Packard Fellowships Advisory Panel, a group of 12 internationally-recognized scientists and engineers, evaluates the nominations and recommends Fellows for approval by the Packard Foundation Board of Trustees. Packard Fellows must be faculty members who are eligible to serve as principal investigators on research in the natural and physical sciences or engineering and must be within the first three years of their faculty careers. Disciplines that are considered include physics, chemistry, mathematics, biology, astronomy, computer science, earth science, ocean science and all branches of engineering. The Packard Fellowship is among the nation’s largest nongovernmental fellowships, designed with minimal constraints on how the funding is used to give the Fellows freedom to think big and look at complex issues with a fresh perspective. Visit the Packard Fellowships for Science and Engineering webpage to learn more about the program.

About the David and Lucile Packard Foundation

The David and Lucile Packard Foundation is a private family foundation created in 1964 by David Packard (1912–1996), cofounder of the Hewlett-Packard Company, and Lucile Salter Packard (1914–1987). The Foundation provides grants to nonprofit organizations in the following program areas: Conservation and Science; Population and Reproductive Health; Children, Families, and Communities; and Local Grantmaking. The Foundation makes national and international grants and has a special focus on the Northern California counties of San Benito, San Mateo, Santa Clara, Santa Cruz and Monterey. Foundation grantmaking includes support for a wide variety of activities including direct services, research and policy development, and public information and education. Learn more at www.packard.org. 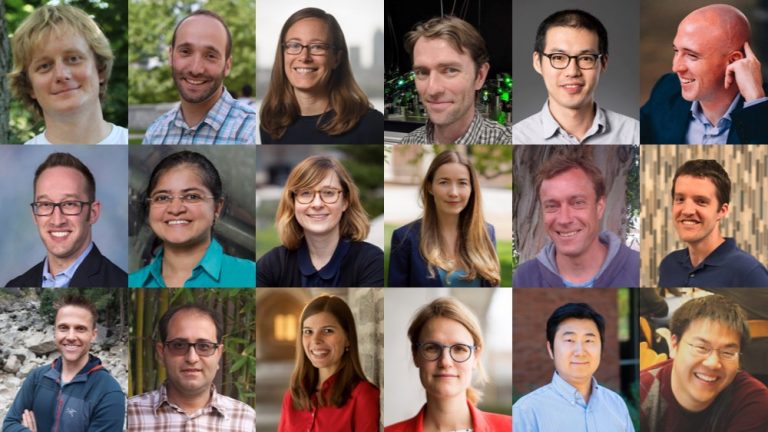 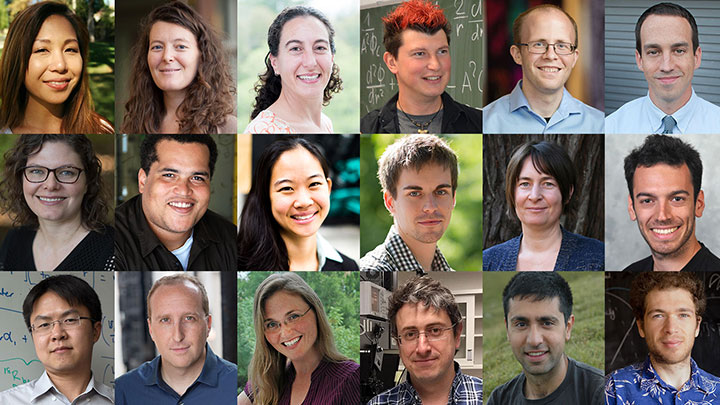 2017 Packard Fellowships in Science and Engineering Awarded to 18 Researchers 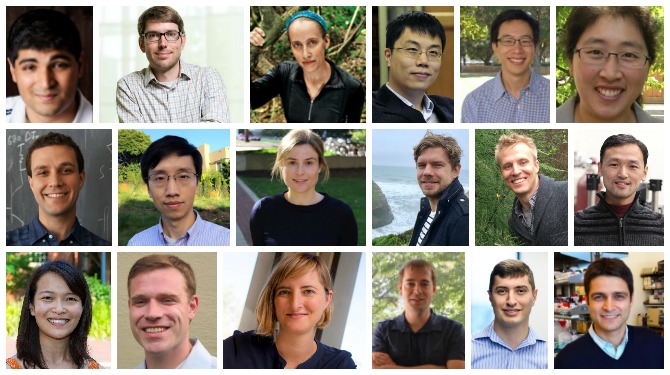 2016 Packard Fellowships in Science and Engineering Awarded to Eighteen Researchers